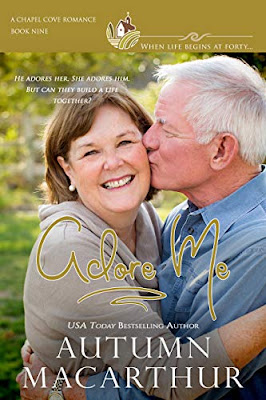 About the Book
He adores her. She adores him. But can they build a life together?

Widowed sixty-something Paula Montana isn’t looking for a new love. Between her pancake restaurant, her volunteer work, and her adorable-but-ill granddaughter, she’s far too busy. Besides, when you’ve lost the man you shared fifty years of your life with, anyone new has a lot of memories to compete with.

Divorced seventy-something doctor Richard Stewart isn’t looking for love, or for family. His disastrous first marriage and a son who hasn’t spoken to him for fifteen years taught him it’s wiser to focus on work. He wasn’t cut out for relationships or for faith, and being an antisocial recluse suits him fine.

But when his son invites Richard to Chapel Cove for Christmas and he meets Mark’s new wife and stepdaughter, as well as Mark's mother-in-law, Paula, things might change for both of them!

A slow-paced, gentle, heartwarming, and uplifting Christian older-couple second chances romance, with faith, love, and plenty of cooking. Includes a bonus recipe!
Amazon / Goodreads
My Thoughts
Adore Me was such a sweet and heartwarming read. I really liked the fact that a more mature couple was featured. You don't see that very often, so that was nice for a change. It showed that you can find your happily ever after at any age and I loved that.

Both Paula and Richard were dealing with deep hurts and there were a lot of hurdles for them to get past. They had their differences and were opposites in many ways, but it was obvious that they really cared about each other. They had great chemistry and there was a definite spark between them.

Adore Me was a lovely novel of second chances, letting go of the past, and learning to trust God and His plans.
Four Stars
Posted by Ashley Sapp at 12:00 AM