Book Beginnings + Friday 56: Soul Raging (The Book of the Wars #3) by Ronie Kendig

Book Beginnings is a weekly meme hosted by Rose City Reader that asks you to share the first sentence (or so) of the book you're reading. Friday 56 is hosted by Freda's Voice and asks you to grab a book (any book), turn to page 56 or 56% in your ereader and share a non-spoilery sentence or two.
This week I'm featuring Soul Raging (The Book of the Wars #3) by Ronie Kendig. This is a fantastic, nonstop action thriller. I'm sad to see this series end, but wow, what an exciting ride! 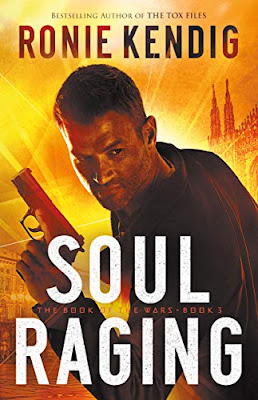 About the Book
Sometimes, the only hope is the enemy.

Leif Metcalfe is done waiting for answers and seizes control, a move that comes with a high price and a deadly risk: teaming up with the enemy. He can only hope that what he uncovers will heal the wounds he's inflicted on those he loves.

Iskra Todorova believes Leif is on a collision course with death and knows firsthand the irrevocable cost of that path to the soul. While trying to protect her daughter and intervene with Leif, Iskra is forced to set her sights on the man behind the evil organization ArC--Ciro Veratti.

Torn apart by injuries and opposing views on how to handle Leif's act of treachery, team Reaper hunts one of their own. The only thing they agree on is not stopping but starting the final battle prophesied in the Book of the Wars.
Book Beginnings

"The devil was once an angel."

Light exploded, searing her eyes. A deafening boom punched Iskra. Smoke billowed into the bunker, squeezing the air from her lungs. Ringing shrilled through her ears, driving her to the ground as she gripped her head and squeezed her eyes shut. Coughing and on all fours, she waded through the disorientation and pain, aiming for the conference table. Shots persisted amid hand-to-hand combat.