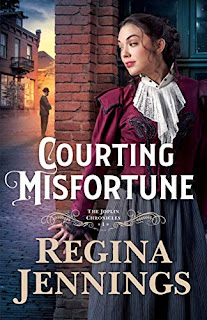 This week I'm featuring Courting Misfortune (The Joplin Chronicles #1) by Regina Jennings releasing December 1. I've heard so many great things about this author's books which makes me super excited to read this one. Plus, I can't seem to resist a novel that features the Pinkertons.
About the Book
Calista York needs one more successful case as a Pinkerton operative to secure her job. When she's assigned to find the kidnapped daughter of a mob boss, she's sent to the rowdy mining town of Joplin, Missouri, despite having extended family in the area. Will their meddling expose her mission and keep Lila Seaton from being recovered?

When Matthew Cook decided to be a missionary, he never expected to be sent only a short train ride away. While fighting against corruption of all sorts, Matthew hears of a baby raffle being held to raise funds for a children's home. He'll do what he can to stop it, but he also wants to stop the reckless Miss York, whose bad judgment consistently seems to be putting her in harm's way.

Calista doesn't need the handsome pastor interfering with her investigation, and she can't let her disguise slip. Her job and the life of a young lady depend on keeping Matthew in the dark.
What upcoming release are you eagerly awaiting?
Posted by Ashley Sapp at 11:00 PM