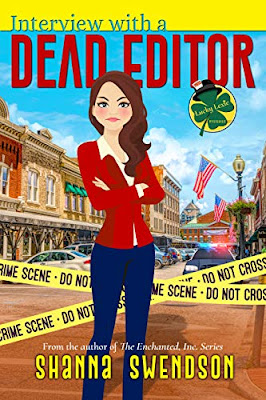 About the Book
Worst Job Interview Ever!

Alexa “Lucky Lexie” Lincoln has always had a nose for news and a knack for being first on the scene whenever there’s a big story. Now her luck seems to have run out. First, she loses her reporting job. Then she gets an interview for a job at a small-town paper, only to find the editor dead on the newsroom floor. That makes her a suspect in the eyes of local policeman Wes Mosby.

To make matters worse, someone sabotages her alibi, and a freak ice storm strands her in town. That’s when she learns that this idyllic little town right out of a movie set is full of secrets, including people with uncanny abilities and the ghost who really runs the newspaper.

To clear her name (and get the job), Lexie will have to find the real killer—a killer who seems to think she knows a lot more than she does. If she’s not careful, she could be the next victim.

A magical new mystery series from the author of Enchanted, Inc.
Amazon / Goodreads
My Thoughts
This was such a fun read! I loved Swendson's Enchanted, Inc. series, so I was super excited for something new from her. This cozy mystery did not disappoint.

Small town Stirling Mills is everything recently unemployed reporter Lexie Lincoln could've dreamed of for her perfect hometown. But it's not long before the veneer of perfection wears off and she sees the dark side of the town when she goes in for an interview at the local newspaper and finds the editor dead. Her day goes from bad to worse when she becomes the prime suspect in the murder. She vows to find the real killer and clear her name before anyone else winds up dead.

Right off the bat, I was completely immersed in this story. The mystery was compelling, the characters likable, and the town charming. I couldn't get enough of it. And while I did figure out who the guilty part was pretty early on, there were quite a few other plausible suspects that had me doubting my original guess from time to time.

All in all, I really enjoyed Interview with a Dead Editor and am eager to check out the sequel. I highly recommend it to fans of paranormal cozy mysteries.
4.5 Stars
Posted by Ashley Sapp at 12:00 AM