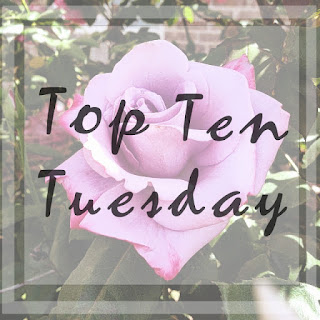 Top Ten Tuesday was created by The Broke and the Bookish in June of 2010 and was moved to That Artsy Reader Girl in January of 2018. It was born of a love of lists, a love of books, and a desire to bring bookish friends together.

This week's topic is Characters I’d Name a Pet After. I thought I'd split this into two categories. The first one is pets I've had that are named after characters and then the second is characters I'd love to name a pet after.
Pets I've Named After a Character
1. Toby, a Nigerian Dwarf Goat named after October Daye from the October Daye series by Seanan McGuire
2. Elphie, a Wyandotte chicken named after Elphaba from Wicked by Gregory Maguire
3. Candle, a Rhode Island Red chicken named after Candle from Son of a Witch by Gregory Maguire
4. Charlie, a Mini Donkey named after Charlie Lionheart from The Lady and the Lionheart by Joanne Bischof
5. Scarlett and Rhett, a Rhode Island Red Hen and Wyandotte Rooster named after Scarlett O'Hara and Rhett Butler from Gone with the Wind by Margaret Mitchell
Characters I'd Love to Name a Pet After
1. Valek and Yelena, the main characters in The Chronicles of Ixia series by Maria V. Snyder
2. Tybalt, Toby's love interest from the October Daye series by Seanan McGuire
3. Wyatt, Ford, and Knox, from the Montana Marshalls series by Susan May Warren
4. Selene, from The Ravenwood Saga by Morgan L. Busse
5. Silas, Rowena, and Izannah, from The Ballantyne Legacy by Laura Frantz
Do you have any pets named after book characters? Do you have names in mind for future pets?
Posted by Ashley Sapp at 11:00 PM