Can't Wait Wednesday is a weekly meme hosted by Wishful Endings that spotlights and discusses the books we're excited about that we've yet to read. Generally, they're books that are yet to be released. It's based on Waiting on Wednesday, hosted by Jill at Breaking the Spine.
This week I'm featuring Defending the Galaxy (Sentinels of the Galaxy #3) by Maria V. Snyder releasing November 23. I've been loving this series. No surprise though since Maria V. Snyder is one of my favorite authors. It's exciting and unique and full of wonderful characters. I'm eager to see how it all concludes. 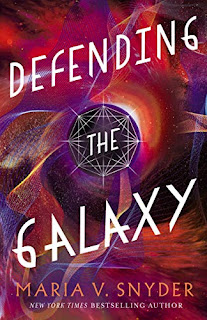 Junior Officer Ara Lawrence here, reporting for duty. Again. It's situation critical for the security team and everyone in the base - including my parents - with a new attack from the looters imminent, a possible galaxy-wide crime conspiracy and an unstoppable alien threat. But this all pales in the face of my mind-blowing discovery about the Q-net. Of course, no one believes me. I'm not sure I believe me. It could just be a stress-induced delusion. That's what my parents seem to believe...

Their concern for me is hampering my ability to do my job. I know they love me, but with the Q-net in my corner, I'm the only one who can help the security team beat the shadowy aliens from the pits we discovered. We're holding them at bay, for now, but the entire Milky Way Galaxy is in danger of being overrun.

With battles on too many fronts, it's looking dire. But one thing I've learned is when people I love are in jeopardy, I'll never give up trying to save them. Not until my dying breath. Which could very well be today...
What upcoming release are you eagerly anticipating?
Posted by Ashley Sapp at 11:00 PM