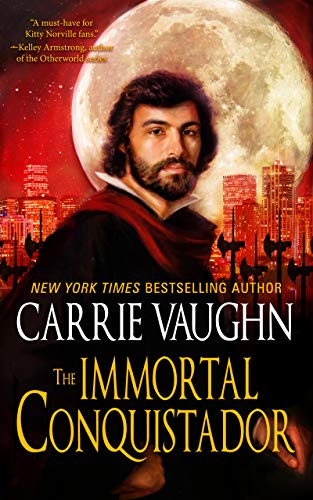 About the Book
From the author of the beloved Kitty Norville werewolf talk-show host series, the last full tale in the series: the vampire origins of Kitty’s famed ally, Rick—and his sudden turn to darkness in the seventeenth century. More than 500 years before his friendship with Kitty, noble Ricardo de Avila met a fate-changing twist, where his morally-complex, blood-soaked existence as an immortal began.

Before being turned, Ricardo de Avila would have followed Coronado to the ends of the earth. Instead Ricardo met with the end of his mortal life—and a new one, as the renegade vampire, Rick.

For over five hundred years, Rick has infuriated the demon world. He has ferociously protected his found-family from marauding vampires, joined forces with a legendary gunslinger, appointed himself the Master of Denver, and called upon a church buried under the Vatican.

The life of a vampire is frequently long, but for Rick, it is never easy.

Now, whether you are new to Vaughn’s fan-favorite novels, or a longtime reader, you’ll be riveted by the final full-length tale of the series.

About the Kitty Norville series:

Carrie Vaughn’s series, about a werewolf who hosts a talk radio advice show for the supernaturally disadvantaged, began with Kitty and the Midnight Hour. The series will end with the The Immortal Conquistador, and the forthcoming collection Kitty’s Mix-Tape.

The Immortal Conquistador is a collection of four novellas set in the Kitty Norville universe that follows vampire Rick. It was an absolutely fascinating read. Rick was always one of my favorite characters in the series, so I was ecstatic to learn more about him and his past. I liked him even more after finishing this.

Rick is a vampire who never wanted to be one. After he was turned against his will, he strove to be better than those that made him. He did his best to control the monster that he had become. He was afraid he lost his soul, afraid that he lost his connection to God forever when he became a vampire. So he was constantly searching, looking for answers, never giving up hope. He kept fighting for his soul.

These four stories take the reader on Rick's journey from when he first became a vampire to finding the answers he was searching for. It's a must read for fans of Kitty Norville, but even if you haven't read the series yet, this book stands alone just fine.