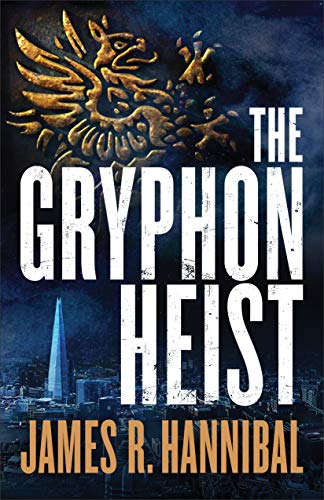 About the Book
Talia Inger is a rookie CIA case officer assigned not to the Moscow desk as she had hoped but to the forgotten backwaters of Eastern Europe--a department only known as "Other." When she is tasked with helping a young, charming Moldovan executive secure his designs for a revolutionary defense technology, she figures she'll be back in DC within a few days. But that's before she knows where the designs are stored--and who's after them. With her shady civilian partner, Adam Tyler, Talia takes a deep dive into a world where only criminal minds and unlikely strategies will keep the Gryphon, a high-altitude data vault, hovering in the mesosphere.

Even Tyler is more than he seems, and Talia begins to wonder: Is he helping her? Or using her access to CIA resources to pull off an epic heist for his own dark purposes?

In this Ocean's Eleven-meets-Mission Impossible thriller, former tactical deception officer and stealth pilot James R. Hannibal offers you a nonstop thrill ride through the most daring heist ever conceived.

The Gryphon Heist was an exciting thriller that was impossible to put down. I was constantly telling myself, just one more chapter, just one more chapter. It's an addictive read, for sure. It was a nice escape from the stresses of the real world. It pulled me away from my worries for just a little bit. I was sucked right into the intrigue and danger these characters faced.

Speaking of the characters, they were a great bunch. Highly entertaining, amusing, and easy to like. Main character Talia had a bit of a prickly personality that took some getting used to, but, in the end, I liked her a lot. Watching her personal growth from beginning to end was something special.

I felt like I was watching a really good spy show while I was reading this. It was so fun. There were lots of twists and turns and while sometimes it was hard to keep things straight, it didn't hamper my enjoyment one bit. I'm really looking forward to checking out the next one!