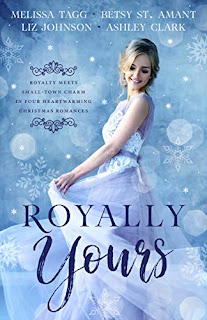 My Thoughts
I absolutely loved visiting the enchanting town of Tinsel, Vermont. What a charming place full of wonderful characters and holiday cheer. I enjoyed the royal aspect and the fact that Tinsel is a media-and-paparazzi-free place where famous people can go to relax and just be normal. What a cool idea for a collection like this. I hope there will be more tales from Tinsel next Christmas.

One Royal Christmas by Melissa Tagg
Jonah, the king of Concordia, temporarily abdicates the throne and heads to Tinsel to recharge. To get away from all his troubles, stresses, and grief. To find himself. When he gets there, he meets town librarian Rowan. (And what an amusing first meeting it was!) Rowan's taken over the running of the library after her Grandma passed away. The library that's falling apart and is being threatened by the City Council to be moved from the beloved historical cottage to a brand new place downtown. Which is practically like destroying her grandma's legacy. Sparks fly between the librarian and the bookish royal. What follows is one of the best Christmas stories I've ever read. It's pretty much perfect. Rowan and Jonah were so likable. So cute together. I loved it!

The Reluctant Princess by Betsy St. Amant
Wanting some independence from the expectations and duties of royal life, some freedom to pursue the things she's passionate about, and tired of feeling like her voice isn't heard, Princess Eleanor heads to Tinsel. Liam's in Tinsel to escape the media-crazed dramatics of his famous family. He's hiding under the name of Miles and the job of chauffeur to Princess Eleanor. There's a definite connection between the two, but can they overcome their differences and secrets to find a happily ever after? This story was predictable, but sweet. Not my favorite of the collection, but not bad.

A Royal Wonderland by Liz Johnson
Prince Andrew, running from a bad breakup that the media won't stop hounding him about, has come to Tinsel and is staying at an old friend's house. Hoping the bad press will die down if he's away from the spotlight, he's helping his friend decorate his house for the annual Candy Cane Lane Contest. When his friend is called away on an emergency, Andrew enlists the help of the intriguing hardware store owner Charlotte to help him finish the decorating. My second favorite story in this collection, I loved Charlie and Andrew. They were such a fun couple. I also loved Charlie's ornery Grandma too. Such a feisty lady that reminded me of my own Grandma.

A Tinsel Holiday by Ashley Clark
Princess Beatrix fell for American journalist Tyler James a couple years ago and still hasn't gotten over him. On a tour of America, their paths cross again in Tinsel, Vermont. Maybe this chance meeting is a possibility for a fresh start. This story was okay. It was a bit wordy and didn't flow very well, but it was a cute read.