Review: The Occupied (A Trevor Black Novel) by Craig Parshall 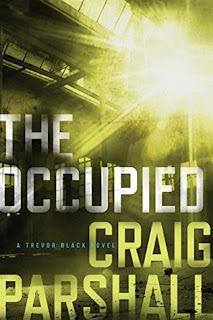 As a youth, Trevor Black unleashed spiritual forces he couldn’t comprehend. Years later, Trevor is a high-flying criminal defense lawyer in New York City, with a six-figure Aston Martin and a trophy wife. But in an extraordinary turn of events, he receives a burdensome gift: the ability to perceive the invisible. And the dark forces he now sees are all gunning for him.

When one of Trevor’s hometown friends is murdered, the MO is eerily similar to a shocking trail of murders that have already crossed the lawyer’s path. So Trevor must return home to find the killer. . . and face not only his own personal demons, but supernatural ones as well.

I'm always in the mood for a good book that deals with spiritual warfare and this one was excellent. From the first line I was hooked.

"I keep monsters in my peripheral vision. When you've been attacked by the horribles, you never forget."


The Occupied takes the reader on a journey through Trevor Black's life divided into three sections titled The Flesh, The World, and The Devil.

"First, there's the world, and all that's in it and all that we see, but also what we can't. Second, the flesh - all those desires, arrogances, strivings - when we let it rule us. Last, but definitely not least, there's the devil. That's in reverse threat level."

First in The Flesh we get a glimpse at when Trevor was a teenager and first came into contact with the supernatural veil. Then, The World, takes a peek into his life in New York City as a lawyer, his deteriorating marriage, his first encounter with “the horribles”, and becoming a Christian. And finally, The Devil, where he makes his return home to solve a mystery and fight “the horribles”.

"Even in all the mud and mire through which we plow, there is a benevolent heavenly Father holding us up with an invisible hand, guiding our ends from our beginnings and nudging us toward the light rather than the darkness. Giving us a thousand chances to make a thousand good choices if we will only take them."

Powerful, compelling, and, at times, chilling, The Occupied was fast paced and impossible to put down. I can't recommend it enough.

"You see, it is not what comes against you that matters. It is who occupies you that counts. Christ, the guardian of your soul."