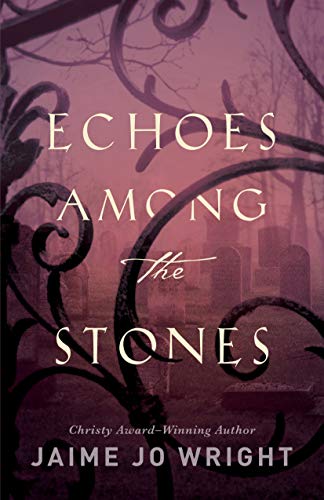 Echoes among the Stones is my favorite Jaime Jo Wright novel yet. I didn't think anything could top The Curse of Misty Wayfair, but this one did. I don't know how she does it, but each new book just gets better and better.

It's a dualtimeline featuring interconnected stories from the present and 1946. I found both times equally compelling. There's no way I could tell you which one I liked better. They were both awesome.

The characters were great. Aggie and Mumsie had quite an interesting dynamic. They've both got prickly personalities. They don't really get along all that great, but they're more alike than not. They internalize things and are so stubborn. But I found them both to be extremely likable and realistic.

There was a haunting melancholy that seeped out of the pages bringing this atmospheric tale to life. It's a definite pageturner and extremely hard to put down. The mystery had me riveted. The intrigue kept building as pieces of the puzzle were revealed. I didn't want it to end. I didn't want to leave these characters I'd come to love. But what a wonderful journey it was! Full of highs and lows. Grief and hope. I can't recommend it highly enough. I enjoyed every second. It's a definite contender for best book of the year.