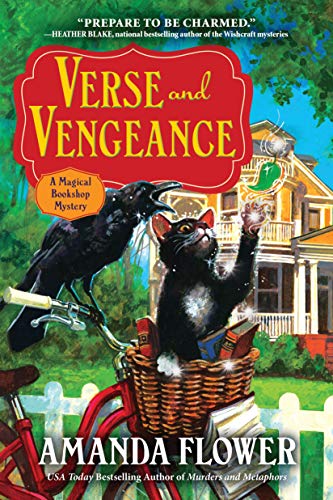 About the Book
With the help of Walt Whitman's works, magical bookshop owner Violet Waverly puts her pedal to the metal to sleuth a bicycle-race murder that tests her mettle.

A bicycle race is not Charming Books proprietor Violet Waverly's idea of a pleasant pastime. But police chief David Rainwater wheelie wants them to enter the Tour de Cascade as a couple, so she reluctantly consents.

The Tour de Cascade is the brainchild of Violet's Grandma Daisy. The race is a fundraiser to build the Cascade Springs Underground Railroad Museum. But not everyone in this Niagara Region village supports the race. As if the bike race weren't tiring enough, pesky private investigator Joel Redding is snooping around Charming Books. It takes all of Violet's and Grandma Daisy's ingenuity to keep Redding from discovering the shop's magical essence--which communicates with Violet through books.

When Redding perishes in an accident during the race, David discovers that the brake line of the private eye's bike was cut. Worse, Violet tops his list of suspects. As Emerson the tuxedo cat and resident crow Faulkner look on, Charming Books steers Violet to the works of Walt Whitman to solve the crime. But no other names ring a bell as culprits, and as David's investigation picks up speed, Violet will have to get in gear to clear her name.

Verse and Vengeance is the fourth installment of the Magical Bookshop Mystery series. And what a fun and enchanting addition it was!

In each book of this series, the works of a different prolific author help to solve the crime. This time, Walt Whitman's poetry played an integral part. I'm not as familiar with his work as some of the other authors featured in previous books, but that didn't hinder my enjoyment one bit. It was a joy visiting Violet, Grandma Daisy, David, and especially Faulkner the crow and Emerson the cat again.

The mystery was a good one. I was 100% sure I knew exactly who the killer was and why. No way was it anybody else. Boy, was I shocked when the reveal came and it was someone else! Never saw that coming! I love it when I can be surprised like that.

All in all, Verse and Vengeance was a fun trip back to Cascade Springs. It's sure to delight old fans of the series and new. I recommend it to anyone who enjoys cozy mysteries that have a touch magic.

I received a copy of this book from the publisher and voluntarily reviewed it. All thoughts and comments are my honest opinion.