Review: Chasing the Shadows (Sentinels of the Galaxy #2) by Maria V. Snyder 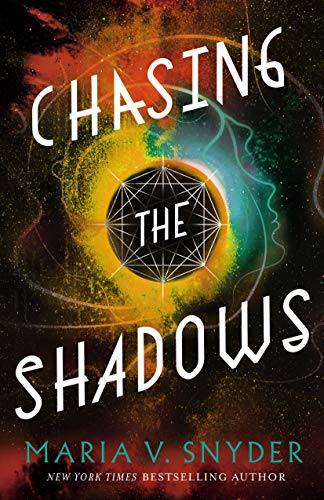 About the Book
Year 2522. Lyra Daniels is dead.

Okay, so I only died for sixty-six seconds. But when I came back to life, I got a brand new name and a snazzy new uniform. Go me! Seriously, though, it's very important that Lyra Daniels stays dead, at least as far as the murdering looters, know.

While dying is the scariest thing that's happened to me, it morphed my worming skills. I can manipulate the Q-net like never before. But the looters have blocked us from communicating with the rest of the galaxy and now they believe we've gone silent, like Planet Xinji (where silent really means dead).

A Protector Class spaceship is coming to our rescue, but we still have to survive almost two years until they arrive - if they arrive at all. Until then, we have to figure out how to stop an unstoppable alien threat. And it's only a matter of time before the looters learn I'm not dead and returns to finish what they started.

There's no way I'm going to let the looters win. Instead I'll do whatever it takes to save the people I love. But even I'm running out of ideas...

Chasing the Shadows is the second installment of the Sentinels of the Galaxy series. And what an exciting and fun scifi adventure it was! I was able to jump right back into this fascinating world without hesitation. I was afraid I wouldn't remember much from the first book and would feel a little lost. (It's been almost a year and over 120 books between the two.) But that wasn't the case at all. It all came back to me in the first chapter. If you're new to the series, I'd definitely recommend starting with book one though.

Lyra, or Ara as I should call her now, is still her same sassy, hilarious, and fearless self. Still getting herself in trouble when she's just trying to help. She's had to take a new identity and is hiding herself away so that Jarren, the murdering looter, won't realize she's still alive and come after her again. Ara's a great narrator. Likable, witty, entertaining. She definitely keeps things lively!

Time flew by while I was reading this book. In fact, I often lost all track of time. I'd look up at the clock and be shocked that over an hour had passed when it felt like minutes. Real life got pushed aside while I traveled the Q-net with Ara. There were so many twists and turns and quite a few shocks that left me breathless. And that ending? Oh my! I need the next book now!