Review: Navigating the Stars (Sentinels of the Galaxy #1) by Maria V. Snyder 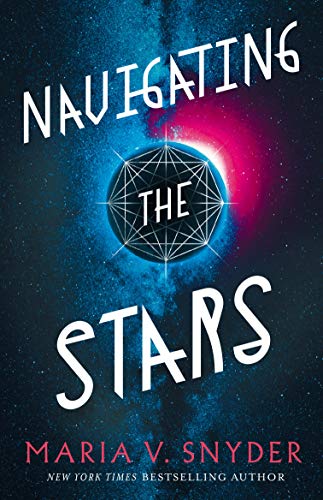 About the Book
“The answer is no, Lyra,” my mother utters her favorite—I swear—phrase.

No means I have to travel with them to another planet—again.

No means leaving all my friends fifty years in the past. Thanks, Einstein.

Seventeen-year-old Lyra Daniels can’t truly blame Einstein or her parents for their impending move across the Milky Way Galaxy. It’s all due to the invention of the Q-net, which made traveling the vast distances in space possible—with one big caveat: the time dilation. But that never stopped Lyra's ancestors from exploring the Milky Way, searching for resources and exoplanets to colonize. What they didn’t expect to find is life-sized terracotta Warriors buried on twenty-one different exoplanets.

As the Galaxy’s leading experts on the Warriors, Lyra's parents are thrilled by the new discovery, sending them—and her—fifty years into the future. Her social life in ruins, she fills her lonely days by illegally worming into the Q-net. The only person close to her age is the annoyingly irresistible security officer who threatens to throw her into the brig.

After the planet they just left goes silent—meaning no communications from them at all—security has bigger problems to deal with than Lyra, especially when vital data files go missing. But that's just the beginning, because they’re not as alone as they thought on their new planet... and suddenly time isn't the only thing working against them.

Maria V. Snyder is one of my favorite authors. Her Study Series is one of my all-time faves. (I could reread those books over and over again and never tire of them.) Her characters are always so multi-dimensional, memorable, and, again, some of my favorites. (I mean, who could ever top Valek and Yelena?) So to say I was excited for a new book from her was a vast understatement.

Even though sci-fi isn't a genre I normally gravitate towards, especially those set in space, I'll read anything this author writes. And Navigating the Stars did not disappoint. It was everything I had hoped it'd be. It featured Snyder's signature style, detailed setting, and a strong, independent leading lady.

Lyra was a great narrator. So relatable, funny, and sassy. And I really appreciated the fact that she actually had a 'normal' relationship with her parents. That's rare to find these days. It was super refreshing.

I will say that it took a little bit of time for all the technical science things to make sense to me. Like time dilation. It was confusing at first, but there was a moment when it all clicked and I found it to be really fascinating.

This was a book I read slowly. Not because I didn't like it, but because I absolutely loved it! I wanted to savor it, take my time, and linger there for as long as I could. I highly, highly recommend it! I'm anxious to get my hands on the sequel! The wait is gonna be torture!

Note: This book does contain some strong language.