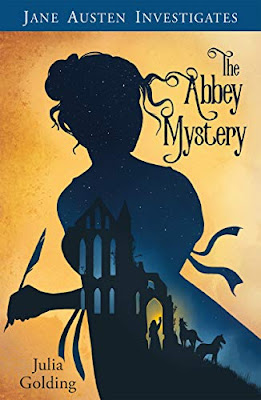 It’s 1789 and a young Jane Austen turns detective as she seeks to solve the mysterious happenings at Southmoor Abbey. When a carriage accident forces a change of plans, 13-year-old Jane is sent to be a companion to Lady Cromwell for a week as the household prepares to celebrate the eldest son’s coming-of-age party. While there, Jane vows to solve the mystery of the ghostly monk in the Abbey grounds – for she does not believe in such stories!

But this is not the only strange occurrence for the adventurous young Jane to investigate. There are shivery night-time investigations, an Indian girl with secret talents, a library fire, two prize horses in danger, and friends to save from false accusations.

With notebook in hand and her faithful dog Grandison by her side, will Jane overcome the continuous obstacles and find out the truth?
What upcoming release are you eagerly awaiting?
Posted by Ashley Sapp at 11:00 PM