Review: The Perks of Meddling (The Sidekick's Survival Guide #2) by Christy Barritt 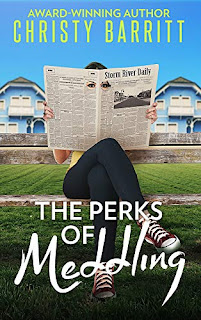 About the Book
She’s determined to work this case—with or without permission . . .

Investigator-wannabe Elliot Ransom doesn’t have much clout with the PI firm that recently hired her. When she meets a woman whose “riffraff” sister has gone missing, Elliot can’t resist the urge to help—despite her boss’s stern warning to stay away. But her snooping may prove as dangerous as the jungle she left behind.

As Elliot digs deeper, the underbelly of wealthy Storm River bubbles to the surface. Following the advice found in her father’s old journal, Elliot tracks the killer. But the more she uncovers, the more of a target she becomes. Could a little meddling lead to a vast amount of trouble?

If there was one thing my mama had taught me, it was to mind my own business.

My dad, on the other hand, had told me that meddling, when done correctly, could change the world.


The Perks of Meddling is the exciting second installment of Christy Barrit's series The Sidekick's Survival Guide.

After her boss turns away a case, Elliot decides to take it on herself. A woman's sister is missing and she's afraid the Beltway Killer is to blame. Elliot vows to devote her time after work to investigating and figuring out what happened to the sister. But then she starts getting threatening messages to back off. By taking this case on, has Elliot made herself the target of a dangerous serial killer?

I flew through the pages of this fast paced mystery. The guilty party wasn't a huge shocker to me, but I had no clue why they did it. I enjoyed trying to figure out the motive. I'm really loving this series. It's got a great bunch of likable and unique characters that I'm excited to keep reading about. I can't wait to dive into the next book.