Book Beginnings + Friday 56: In Spite of Ourselves: A Murphy Brothers Story by Jennifer Rodewald

This week I'm featuring In Spite of Ourselves by Jennifer Rodewald. It releases this coming Tuesday, July 28. I was lucky enough to get an advanced copy of it and it's fantastic! Another winner from Ms. Rodewald. 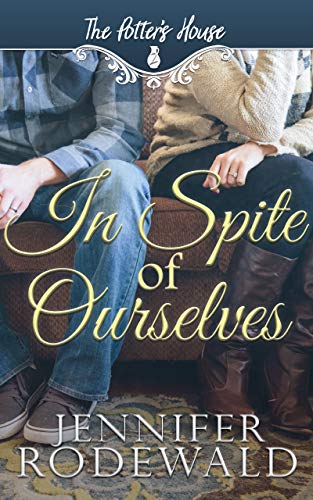 About the Book
Who could build a life on such a monumental mistake?

Jackson Murphy: family prankster, class clown… and now, smack in the middle of a Vegas-sized mess. All he’d wanted was to qualify for the Boston Marathon. After failing that goal, he slipped into a deep, sulking valley, only to emerge from it with a much bigger problem. He’s married. To a complete stranger! Forget making a world-class marathon so that his family will believe that (1) he’s capable of being grown up and serious on occasion and (2) he doesn’t need the ongoing pity about his brother and a certain ex-girlfriend.

Now? Now he has no idea what to do.

Mackenzie Murphy: independent woman and excellent student—but not a med student. Because those pesky MCATs were H-A-R-D. She doesn’t particularly mind that much, seeing as she’s never really wanted to be a doctor, but her mother will be…uh, displeased. Exceptionally. That’s nothing, however, compared to how Mother will respond if she finds out what else happened in Vegas.

Mackenzie wants out. Jackson wants a chance. Neither of them is prepared for what’s coming. Caught in the middle of a disaster that keeps getting bigger, they hardly dare ask: Can God take their monumental mistake and turn it into a beautiful life?

In Spite of Ourselves, Book 13 in The Potter's House Books Series Two, is an uplifting and inspiring story of hope, redemption and second chances. It is also book Two in Jennifer Rodewald's Murphy Brother Stories (book One is Always You). Grab your copy and be encouraged today.

Of all the ways he could have imagined this weekend going, this had never entered his mind. Not once. And if someone had told him it would happen this way, he would have laughed in their face, said Not in a million years, and gone on his way.


Her laugh was like a summer river. It flowed, sometimes high, sometimes low, and he was completely washed in the delight of it.