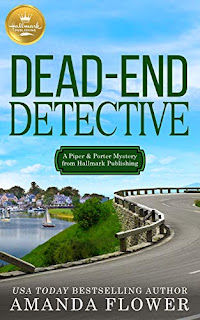 About the Book
They were the Two Girls Detective Agency.
Now, one of them is dead,
and the other is suspected of murder.

Darby Piper is in shock. Samantha Porter—her mentor and business partner at Two Girls Detective Agency—has died in a car crash, and it doesn’t look like an accident. In fact, evidence is pointing toward Darby.

Darby had expected to inherit Samantha’s half of the agency, but Samantha had recently changed the will to leave it to Tate Porter, her nephew, who returns to town.

Tate is no P.I. He’s a veteran, a world traveler, and something of a mystery himself. But as he helps Darby delve into secret histories and real estate development plans, he does seem to have a knack for the job. Will the agency have a future…even if Darby can prove her innocence in time?