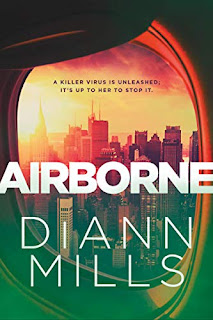 About the Book
Heather Lawrence’s long-awaited vacation to Salzburg wasn’t supposed to go like this. Mere hours into the transatlantic flight, the Houston FBI agent is awakened when passengers begin exhibiting horrific symptoms of an unknown infection. As the virus quickly spreads and dozens of passengers fall ill, Heather fears she’s witnessing an epidemic similar to ones her estranged husband studies for a living—but this airborne contagion may have been deliberately released.

While Heather remains quarantined with other survivors, she works with her FBI colleagues to identify the person behind this attack. The prime suspect? Dr. Chad Lawrence, an expert in his field . . . and Heather’s husband. The Lawrences’ marriage has been on the rocks since Chad announced his career took precedence over his wife and future family and moved out.

As more victims fall prey days after the initial outbreak, time’s running out to hunt down the killer, one who may be closer to the victims than anyone ever expected.

What an intense and timely read considering what's going on in the world right now. It was scary and anxiety-inducing at times, but there was hope mixed in there too. The chapters were short and the pace was fast, making this a quick read. The plot was strong, but I never really connected with any of the characters. I kept hoping I would, but it never happened. There were also times when the dialogue was a little awkward and it kinda took me out of the story for a minute there. But all in all, it was a good read that kept me interested in trying to figure out what was going on.