Review: The Exercise of Interfering (The Sidekick's Survival Guide #3) by Christy Barritt 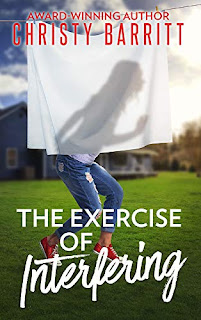 As if participating in a lip-synching competition wasn’t bad enough for Elliot Ransom, things take a turn for the worse when a dead man is found backstage with Elliot’s name and photo in his pocket.

Desperate for the truth, the apprentice PI digs into what happened. Was the man’s death somehow connected with Elliot’s upbringing in South America? Could her father’s clandestine enemies now be targeting her?

As danger rises, Elliot must find answers and protect those she loves. But this murder might have much deeper implications than she ever guessed. Could a little harmless interfering lead to a whole lot of unintended consequences?

Elliot and her coworkers are competing in a lip-sync battle when things take a turn for the worse. Right before they're supposed to go on stage, a dead body is discovered. It gets personal for Elliot when they find the dead guy in possession of a picture of her. She doesn't know the man, so why did he have her picture? Could he be connected to her dad's mysterious death?

This was another great read from Christy Barritt. I was happy that there were some new developments made with the mystery surrounding Elliot's dad. There's still a lot more to uncover, and more questions were raised, but this was good progress. I'm excited to see what happens next in The Practice of Prying.