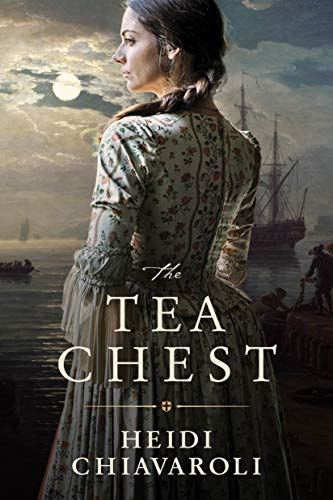 About the Book
Boston, 1773
Emma Malcolm’s father is staunchly loyal to the crown, but Emma’s heart belongs to Noah Winslow, a lowly printer’s assistant and Patriot. But her father has promised her hand to Samuel Clarke, a rapacious and sadistic man. As his fiancée, she would have to give up Noah and the friends who have become like family to her—as well as the beliefs she has come to embrace.

After Emma is drawn into the treasonous Boston Tea Party, Samuel blackmails her with evidence that condemns each participant, including Noah. Emma realizes she must do whatever it takes to protect those she loves, even if it means giving up the life she desires and becoming Samuel’s wife.

Present Day
Lieutenant Hayley Ashworth is determined to be the first woman inducted into the elite Navy SEALs. But before her dream can be realized, she must return to Boston in order to put the abuse and neglect of her childhood behind her. When an unexpected encounter with the man she once loved leads to the discovery of a tea chest and the document hidden within, she wonders if perhaps true strength and freedom are buried deeper than she first realized.

Two women, separated by centuries, must find the strength to fight for love and freedom. . . and discover a heritage of courage and faith.

The Tea Chest was an amazing and breathtaking read. It held me captive from beginning to end. It was a definite page-turner that was almost impossible to put down. I can't say enough good things about it.

I was pulled right into the story, into these characters lives. The real world faded away. I was no longer sitting in my bedroom, but was right beside Haley before and during her SEAL training and back in Boston with her investigating the history of the tea chest. I was right there back in 1773 with Emma during the Boston Tea Party and the years that followed. It's rare that a book can so completely pull me in, but this one did just that.

Both timelines were compelling, though I did find myself drawn just a little bit more to the past. I found it really interesting learning more about the Boston Tea Party and what followed. The struggles, triumphs, and hardships. The challenges they faced. Things I never knew before.

I admired both ladies. Their strength and courage. It was a different kind of strength they each had, but I think that by the end of the story, it actually became the same kind of strength. I don't know if that makes sense, but I really enjoyed watching their journeys and their growth.

I didn't want The Tea Chest to end. In fact, I read it slower than I normally would. I took my time with it and savored it just so it would last longer. So I could spend more time with these wonderful characters. This was my first time reading anything by Heidi Chiavaroli, but it definitely won't be my last. I'm very much looking forward to checking out her previous books and am eager to see what she comes out with next. She's found a spot on my insta-buy list.