Review: Cry of the Raven (The Ravenwood Saga #3) by Morgan L. Busse 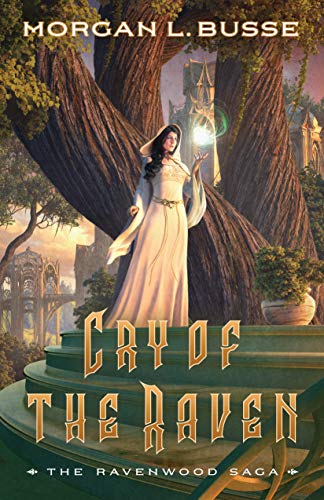 About the Book
Lady Selene Ravenwood has come into her full power as a dreamwalker just as the war with the Dominia Empire begins. Working with the other Great Houses, Selene and Damien use their gifts to secure the borders and save those devastated by the war. But conflict, betrayal, and hatred begin to spread between the Great Houses, destroying their unity as the empire burns a path across their lands. At the same time, Damien Maris starts to lose his ability to raise the waters, leaving the lands vulnerable to the empire's attacks.

The only one who can unite the houses and restore her husband's power is Selene Ravenwood. But it will require that she open her heart to those who have hurt her and let go of her past, despite the one who hunts her and will do anything to stop her power.

Will Selene survive? Or is she destined to fall like the dreamwalkers before her?

I was so excited for Cry of the Raven. The Ravenwood Saga has been the best fantasy series I've read in recent years and I was so eager to find out how it would all conclude. Not gonna lie, I was a little sad too. I didn't want to say goodbye to these wonderful characters or end this epic adventure. But I have to say, it was an absolutely brilliant, beautiful, and perfect ending. It soared past my high expectations and was beyond anything I could've hoped for.

To think of where Selene started in the first book and to watch her journey and growth as a character. To see where she ended up in this finale, coming out of the darkness and fully embracing the Light. Wow, just, wow! So powerful.

I can't recommend this series highly enough. The spiritual message was so impactful, so striking, so powerful. There were times it took my breath away. I loved it.