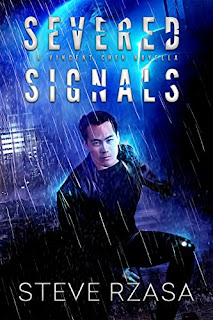 About the Book
The enemy of my enemy…

Vincent Chen keeps star systems in close communication with each other as he tends to the comms ferry satellites that connect the Realm of Five.

When he responds to small colony’s apparent malfunction, though, he stumbles onto an enslaved people.

The problem is, the enslaved used to be the oppressors.

They’re all former agents of Kesek, the secret police that spent the last century suppressing religion by arresting, torturing, and killing believers—including Vincent’s uncle. But it also includes the children and families of those agents.

Vincent is drawn deeper into the plot against them, until he’s forced to choose the right side…

Whether he can forgive, however, is the most dangerous question.

Severed Signals is the first book by Steve Rzasa I've read, but it definitely won't be the last. It takes place in the same universe as his Face of the Deep series and even though I haven't read that yet (it's on my TBR list) I still enjoyed this story quite a bit. It did take me a minute to get acclimated to all the science-y stuff but once I did, I could hardly put the book down.

The world building was stellar, all the tech-stuff was fascinating, and Vincent was a great leading man. He's not perfect, but he's flawed in a realistic and relatable way. Dealing with something I think everyone would probably struggle with. Trying to forgive an enemy who has wronged him gravely. Watching him work through the forgiveness process was admirable. It really makes you stop and wonder if you'd do the same in the same situation.

This novella packed a big punch. It was exciting and fast paced. I'm eager to check out the rest of this series. I recommend it to anyone looking for a good sci-fi read.