Review: When I Come Home Again: A Big Prairie Romance by Jennifer Rodewald 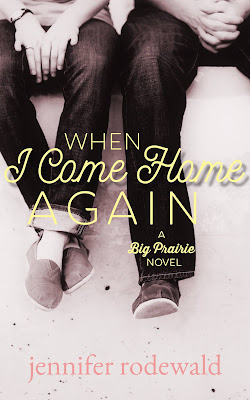 About the Book
When a family crisis calls him back to Big Prairie, will Craig Erikson be able to work through past mistakes and the tragedy that had sent him searching for a new place to call home?

Brenna Blaum had been sure of three things in her life—her brother, her running, and her dad’s star receiver. But in a matter of a year’s time, everything she’d counted on fell apart, leaving her devastated. Seven years later, she’s stable again. She has a supportive boyfriend, fulfilling career, and close friends. She keeps her past heartache where it belongs—in her rearview mirror. Until the man who broke her heart finds his way back to Big Prairie.

Craig Erikson had it all—popularity, success, and the love of his high school coach’s daughter. But after a year of mistakes that ended in a tragic accident, he’d left Big Prairie—the place he’d thought to always call home—hoping that without his antagonizing presence, Brenna would be able to heal. Now his mother desperately needs him, as do two young boys in her care. Craig has little choice but to return for good.

Unsure that she can forgive him, Brenna does her best to avoid him. Irritated that she ignores him as if they’d never meant anything to each other, Craig becomes determined not to allow it.

Life in a small town forces their interaction, making them confront their unresolved issues and igniting emotions that have smoldered for seven years. As Craig and Brenna are pushed together, can they endure the hard places still littering their lives? If so, is it possible to find their way back to love and home again?

Jennifer Rodewald has done it again! When I Come Home Again is another stellar and poignant masterpiece of a romance. I laughed and cried. Felt joy and sorrow. Hope and despair. I experienced all the up and down emotions of this crazy life in the midst of this book.

Craig Erikson was first introduced in Ordinary Snowflakes. I fell for him then and I fell for him even more throughout the course of this book. He's such a genuinely good guy. He's back home again after many years away. He left for a reason and now that he's back, facing the past hurts. Reliving his mistakes. His regrets. Memories are around every corner. In particular, Brenna Blaum. He can't seem to avoid his former girlfriend in small town Big Prairie. Their paths are constantly crossing. And he doesn't know if that's a good thing or a very bad thing. Watching their journey through all the hurts, misconceptions, and regrets of their past was heart-wrenching at times, but wow, what a journey!

I loved the small town of Big Prairie. There was a very authentic feel to the place and the people. Like I might come across any one of these interesting characters in the next town over.

This was a fantastic story of coming home again. It's my new favorite book from this author. I highly recommend it and am very much looking forward to visiting Big Prairie again in the future.