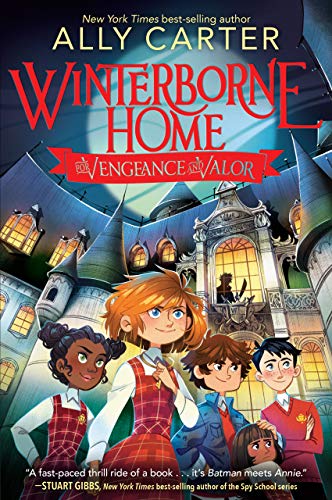 About the Book
New York Times best-selling author Ally Carter’s middle grade debut is full of mystery, mayhem, and friendship, and it will keep you guessing until the very end.

April didn’t mean to start the fire. She wasn’t even the one who broke the vase.

She had absolutely no intention of becoming the only person who knows that Gabriel Winterborne, the missing-and-presumed-dead billionaire, is neither missing nor dead and is actually living in the basement of Winterborne House, sharpening his swords and looking for vengeance.

Now that April knows Gabriel Winterborne is alive, it’s up to her to keep him that way. But there’s only so much a twelve-year-old girl can do, so April must turn to the other orphans for help. Together, they’ll have to unravel the riddle of a missing heir and a creepy legend, and find a secret key, before the only home they’ve ever known is lost to them forever.

Why I Need It
It's been way too long since I've read anything from Ally Carter. I loved her Gallagher Girls and Heist Society books, so I'm excited to check this one out. I saw that it was pitched as what would happen if little orphan Annie went to live with Batman. How awesome does that sound?