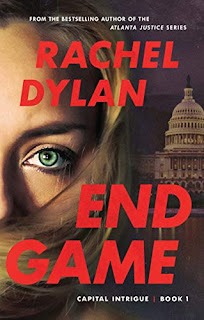 About the Book
When elite members of the military are murdered on the streets of Washington, DC, FBI Special Agent Bailey Ryan and NCIS Special Agent Marco Agostini must work together to bring the perpetrator to justice. Unfortunately, all evidence points to a Navy SEAL sniper whom Bailey refuses to believe is guilty.

When Bailey and Marco start to connect the dots between the victims, including a link to a powerful defense contractor, they wonder if there's a deeper cover-up at play. Then Bailey is targeted, and it becomes clear that someone is willing to kill to keep their dark secrets.

With the stakes getting higher by the moment in a twisted conspiracy, there's a rush against the clock to determine whom they can really trust. As allies turn to enemies, the biggest secret yet to be uncovered could be the end of all of them.

End Game is an exciting thrill ride from start to finish. An intriguing conspiracy and possible cover-up made it unputdownable. I was feverishly turning the pages to find out just what exactly was going on. I couldn't read it fast enough. There were lots of twists and turns I didn't see coming. It kinda reminded me of an episode of one of those really good TV crime shows.

There was a full cast of likable characters with Bailey and Marco taking the lead. They were a great pair. So different in their approaches to things, but I think that's what made them such a good team.

End Game is exactly the type of suspense that I love. Lots of action, a good mystery, and a side dose of romance. I highly recommend it to anyone who enjoys romantic suspense. I can't wait for book two!