Review: Between Shifts (The City Between #2) by W.R. Gingell 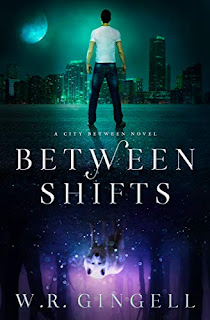 About the Book
There’s a body beneath the skip bins. Fae on the forklift. A vampire in the manager’s office. And there’s definitely something skeevy going on in the locker rooms.

I was meant to stay out of it, but somebody’s gotta do something when humans are being killed by Behindkind creatures.

Lucky for me, my owners are just as dangerous and inhuman as the bad guys...

Between Shifts was so much fun! It's the second book in The City Between series and was another wonderfully weird tale. I can't get enough of this crazy world and quirky characters.

Pet and her affectionately named “three psychos” are back and trying to solve a string of murders that have happened near the supermarket they frequent. The mystery was really well done. I had my suspicions, but wasn't certain until just before the reveal.

One of the things I've really loved about this series is that it's a clean read. There's no bad language or steamy scenes which is often hard to find in this favorite genre of mine. It's something I'd happily recommend to everyone who enjoys this type of story. Definitely start with book one though!