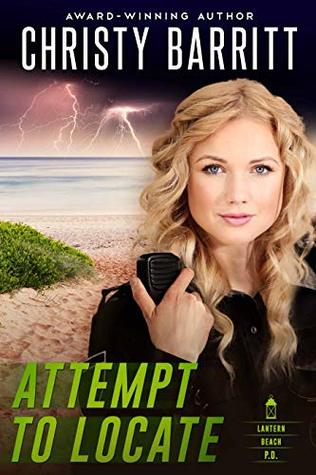 About the Book
A deadly trio of robbers. A missing woman. A community in crisis.
A fun girls’ night out turns into a nightmare when armed robbers barge into the store where Cassidy and her friends are shopping. As the situation escalates and the men escape, a massive manhunt launches on Lantern Beach to apprehend the dangerous trio.

In the midst of the chaos, a potential foe asks for Cassidy’s help. He needs to find his sister who fled from the secretive Gilead’s Cove community on the island. But the more Cassidy learns about the seemingly untouchable group, the more her unease grows.

The pressure to solve both cases continues to mount. But as the gravity of the situation rises, so does the danger. Cassidy is determined to protect the island and break up the cult . . . but doing so might cost her everything.

***Attempt to Locate is the second book in the new Lantern Beach P.D. series. Each novel contains a standalone mystery, but several overarching mysteries stretch throughout the entire series.***

Other Books in the Lantern Beach P.D. series:
On the Lookout
Attempt to Locate
First Degree Murder (coming in March)

The second in the Lantern Beach P.D. Series, Attempt to Locate starts the suspense right off the bat, keeps the intrigue going and the stakes high until the thrilling conclusion.

A lot's going on around Lantern Beach. They're still dealing with Gilead's Cove, the cult that's recently made the island their home. Plus, a dangerous trio of robbers that's been terrorizing the Outer Banks have just made their way to town.

There was a crossover from one of Barritt's other series that I absolutely loved! It was great seeing this character again and interacting with the Lantern Beach bunch.

Attempt to Locate was another exciting and suspenseful mystery from Christy Barritt. I'm so glad I don't have long until the next book is released. I can't wait!