Review: Between Jobs (The City Between #1) by W.R. Gingell 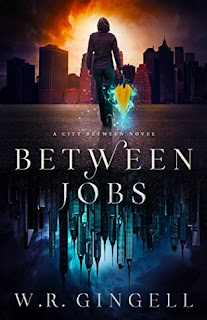 About the Book
When you get up in the morning, the last thing you expect is to see a murdered guy hanging outside your window. Things like that tend to draw the attention of the local police, and when you’re squatting in your parents’ old house until you can afford to buy it, another thing you can’t afford is the attention of the cops.

It’s not my real name, but it’s the only one you’re getting. Things like names are important these days.

And it’s not so much that I’m Pet.

A human pet: I belong to the two Behindkind fae and the pouty vampire who just moved into my house. It’s not weird, I promise—well, it’s weird, yeah. But it’s not weird weird, you know?

Wow, just, wow! This book was utterly unique and so, so good. I don't even know how to begin to describe my thoughts on it.

It's a dark and gritty urban fantasy set in Australia. I loved the setting, the world building, the characters, the writing. I pretty much loved everything about it. Well, except that it ended. ;)

Pet was a great narrator. She's likable, quirky, sassy, and is constantly getting into some kind of mischief. She tells the story as if she's telling it to a close friend.

I was happily lost in this book. And, yeah, I was lost on numerous occasions, but that was part of the fun of this novel, I think. I was discovering things right alongside Pet. I'm anxious to get my hands on the sequel. I highly recommend it to anyone who loves urban fantasy.