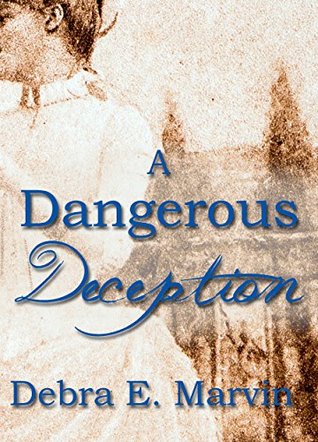 About the Book
Jerome, Arizona Territory, 1899
When Andromeda Barr left her colorful past behind in pursuit of a normal—albeit solo—life, she didn’t exactly settle for the mundane. Performing is in her blood, and right now she has to believe she’s lying for all the right reasons—justice for the excluded, the overlooked of society—a debt she owes to the two unusual people who raised her.

Pinkerton Agent Connell O’Brien is on the trail of a wanted murderer holed up in ‘the wickedest town in the west.’ Hiding his identity is part of the job, but when he meets the surprising Miss Barrington, he begins to wonder how many secrets are too many.

Two close calls with disaster seem to suggest it’s time they both stop running from the guilt of the past and let mercy catch up, but will these two solo acts join forces before the danger of discovery becomes a matter of life or death?

I really enjoy books that feature the Pinkertons. A Dangerous Deception has not one, but TWO Pinkerton agents! I couldn't wait to read it! Once I started it, I didn't want to stop! It was fast paced and had me clicking through the pages as fast as I could. It was an exciting and fun read filled with danger, intrigue, and a great message of faith.

I loved the name Andromeda! It's so unique and completely fit the character. She's full of sass and spunk and was so much fun to read about. Connell was the perfect guy for her.

The circus terms and definitions at the beginning of each chapter were really interesting and I learned lots of new things from them.

A Dangerous Deception is my favorite story from Debra Marvin yet! I can't recommend it highly enough!