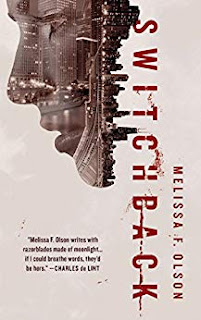 About the Book
The Bureau of Preternatural Investigations returns in the sequel to Melissa F. Olson's Nightshades.

Three weeks after the events of Nightshades, things are finally beginning to settle for the Chicago branch of the BPI, but the brief respite from the horror of the previous few weeks was never destined to last.

The team gets a call from Switch Creek, WI, where a young man has been arrested on suspicion of being a shade.

The suspect is held overnight, pending DNA testing, but seemingly escapes in a terrifying and bloody massacre. But is there more to the jailbreak than a simple quest for freedom?

I meant to read Switchback a lot sooner, but it somehow kept getting pushed further and further back in my TBR pile. I'm so glad I finally found the time to read it! I loved the first book and this one was just as good. I was afraid I'd be a bit lost when I started it since it'd been a while since I finished Nightshades, but no worries. I dove right in with no trouble. It was an action packed, fast paced quick read. My only complaint was that I wished it had been longer. It ends with a cliffhanger, leaving me very eager for the next book. I highly recommend this series to anyone who loves urban fantasy.