Can't Wait Wednesday: To Catch a Witch: A Wishcraft Mystery by Heather Blake 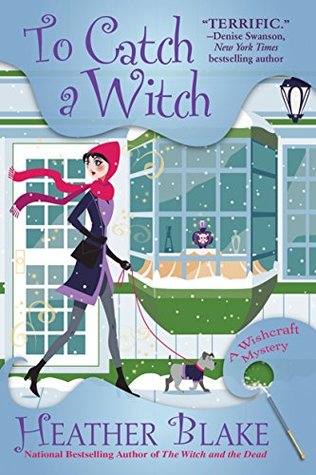 This week I'm featuring To Catch a Witch: A Wishcraft Mystery by Heather Blake releasing August 7, 2018.

About the Book
National bestselling author Heather Blake is back with wishcrafter Darcy Merriweather in her eighth magical Wishcraft mystery adventure.

Wishcrafter Darcy Merriweather might be a witch with the ability to grant wishes for others, but wishing isn’t going to help her catch a killer…

When wishcrafter Darcy Merriweather’s personal concierge company is hired by elite runner Abby Stillwell to organize the Wicked Mad Dash, a competition that takes place in the Enchanted Village, Darcy is more than willing to help her friend. As blizzard conditions rage on the morning of the race, Darcy’s main concern is the terrible weather—until Abby goes missing…and is later found dead, buried in the snow.

As Darcy investigates her friend’s untimely death, she learns that she didn’t really know Abby well at all. And those closest to the woman—her secret fiancé, her roommate, her ex-boyfriend, and her co-workers at Balefire Sports—seem to have plenty to hide too. As Darcy digs deeper, she uncovers complicated relationships, a possible embezzlement scheme, and allegations of cheating against a top athlete.

Just when Darcy is convinced she’s hit a dead end in the case, a startling burglary and the hunt for Abby’s elusive ex send Darcy down a dark, dangerous trail. It will take the help from friends, family, and a little bit of magic for Darcy to stop a stone-cold killer from striking again.

Why I Need It
Yay! There's finally a new addition to my favorite cozy mystery series! I'm so excited to visit these quirky characters and the "enchanting" setting again! Plus, how adorable is the cover?

What upcoming release are you looking forward to?