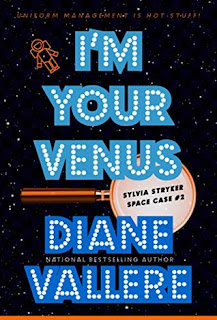 When Sylvia Stryker boards Moon Unit 6 as uniform lieutenant, it’s with an eye on the future. After space pirates destroyed her life, the trek to Venus provides a fresh start. But when the winner of the promotional contest designed to hype the trip is found dead outside the uniform ward, sleuthing takes top priority.

The amorous effect of Venus on the already frisky passengers threaten to compromise the investigation—not to mention the victim’s secret relationship with Sylvia’s boss. Forward thinking, back channels, and distractions on the side lead Sylvia on a pulse-pounding probe that exposes a murderer along with the surprising truth about her past.

Book Beginning
Moon Unit 6 was twice the size of the last spaceship the company had in rotation, and, thanks to the wonders of technology, half the weight. At least that's what the promotion catalog claimed. The ship was docked by the boarding station where families gathered. The sweepstakes was a publicity stunt intended to distract the tourist-traveling public from what had happened the last time a Moon Unit promised "the adventure of a lifetime."

Friday 56 (56% on my Kindle)
I released the computer tablet from the wall and handed it back to Daila. "This wasn't my call," I said.