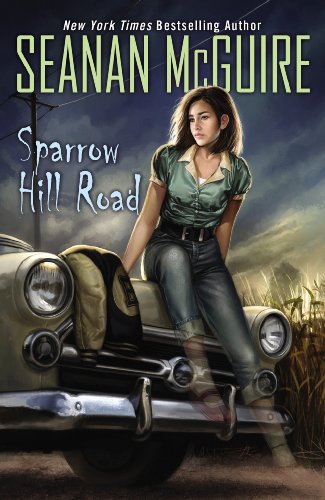 About the Book
Rose Marshall died in 1952 in Buckley Township, Michigan, run off the road by a man named Bobby Cross—a man who had sold his soul to live forever, and intended to use her death to pay the price of his immortality. Trouble was, he didn’t ask Rose what she thought of the idea.

They have names for her all over the country: the Girl in the Diner. The Phantom Prom Date. The Girl in the Green Silk Gown. Mostly she just goes by “Rose,” a hitchhiking ghost girl with her thumb out and her eyes fixed on the horizon, trying to outrace a man who never sleeps, never stops, and never gives up on the idea of claiming what’s his. She’s the angel of the overpass, she’s the darling of the truck stops, and she’s going to figure out a way to win her freedom. After all, it’s not like it can kill her.

It's been a few years since I first read Sparrow Hill Road, so I figured I should reread it to refresh my memory before starting the sequel, The Girl in the Green Silk Gown. I loved it the first time and loved it even more this second go around.

It's a little spooky, but not too bad. I'm not usually a fan of scary stories, but I found this one to be just right, I think. It was a bit melancholy at times, but it's narrated by a ghost who died too young, at the age of sixteen, so that's to be expected. Though there was also a lot of humor, too. So that was nice.

Rose is an instantly likable character. She's seen many things and traveled many roads through many decades often known as “the Ghost of Sparrow Hill Road, “the Girl at the Diner”, and “the Phantom Prom Date”, just to name a few. She's not someone to be messed with. She's grown to be fierce, but she's also just about the most helpful and honorable ghost you'll ever meet.

It was great to travel the ghost roads with Rose once again and I'm very eager to find out what happens next in The Girl in the Green Silk Gown.