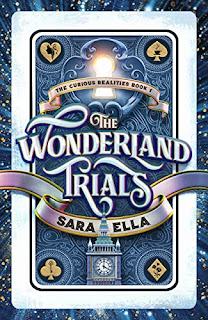 About the Book
Solve the clues. Face your fears. Survive the Trials.

All Alice Liddell wants is to escape her Normal life in Oxford and find the parents who abandoned her ten years ago. But she gets more than she bargained for when her older sister Charlotte is arrested for having the infamous Wonder Gene—the key to unlocking the curious Wonderland Reality.

Soon, Alice receives a rather cryptic invitation to play for Team Heart in this year’s annual—and often deadly—Wonderland Trials. Now she has less than twenty-four hours to find her way into Wonderland where nothing is impossible . . . or what it seems.

The stakes are raised when she discovers players go missing during the Trials each year. Will she and her team solve the clues and find the missing players? Or will betrayal and distrust win, leaving Alice alone in a world of her own? Follow the White Rabbit into this topsy-turvy fantasy where players become prey, a sip of the wrong tea might as well be poison, and a queen’s ways do not always lead one where they ought to go.
What upcoming release are you eagerly anticipating?
Posted by Ashley Sapp at 11:00 PM