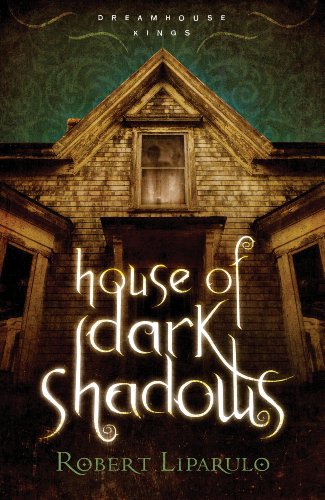 When the Kings move from L.A. to a secluded small town, fifteen-year-old Xander is beyond disappointed. He and his friends loved to create amateur films . . . but the tiny town of Pinedale is the last place a movie buff and future filmmaker wants to land.

But he, David, and Toria are captivated by the many rooms in the old Victorian fixer-upper they moved into--as well as the heavy woods surrounding the house.

They soon discover there's something odd about the house. Sounds come from the wrong directions. Prints of giant, bare feet appear in the dust. And when David tries to hide in the linen closet, he winds up in locker 119 at his new school.

Then the really weird stuff kicks in: they find a hidden hallway with portals leading off to far-off places--in long-ago times. Xander is starting to wonder if this kind of travel is a teen's dream come true . . . or his worst nightmare.

With it being October, I was in the mood for a bit of a spooky read and thought I'd try House of Dark Shadows. I don't read too many scary stories, mainly because I'm such a chicken where they're concerned, lol, but this one sounded really interesting so I thought I'd give it a chance.

It was really good! It was just the right amount of spooky for me. Not enough to give me nightmares, but there were definitely a few times when it gave me goosebumps. It's a page-turner, for sure. Once I started it, I had a hard time stopping. There was so much suspense and I never knew what would happen next. It was a lot of fun trying to figure out what was going on with the house alongside brothers Xander and David.

My only complaint is that there wasn't a satisfying ending. I know it's the first book in a series, but it felt like the story had just started going and then it ended with no resolution. It ended too soon for me. I definitely want to continue the series, but I'm just not the biggest fan of endings like this.