This week I'm featuring Emerald Illusion by J. Rodes which just released yesterday. I was lucky enough to read an early copy of this book and OH MY GOODNESS! It was awesome! You can find my review here. It's a book that I can't recommend highly enough and can envision myself rereading again and again. 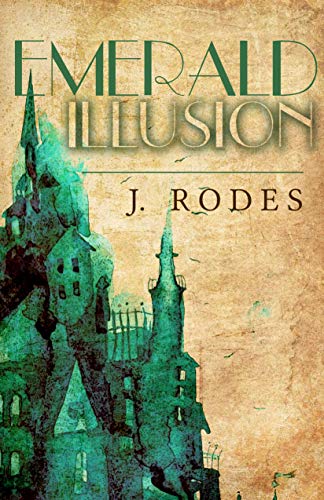 About the Book
Abrielle used to dream of a different life. Adventure. Romance. Hope.
Not of Kansas.

Now, after the loss of her mother and a move she didn’t want to make, she’s lost the will to dream anymore, let alone believe in her father’s Somedays.

But a swirling wind, a wall of leaves, and a blinding darkness literally transform her world.

She and both of her brothers, Brogan and Matteaus, are swept from Kansas to someplace beyond—to a desert in which everything is watery-brown, including the sky and the light of the weak sun. Abrielle finds herself in the middle of a realm everyone had heard of but no one believed existed. Except this version is rundown and broken, void of color and hope. Not much different from her view of life in Kansas.

When she gathers her bearings, she discovers her youngest brother is missing, lost in a land that is foreign and dying. Finding Matteaus becomes her sole focus, but when she and Brogan meet a boy named Levi, who only adds more mystery to this world that shouldn’t exist, she finds out this kingdom is much more perilous than the children’s book ever told.
Matteaus is in great danger.

There is nothing safe about Oz.

I used to dream of a different life. Adventure and wonder. Maybe a little romance - because at seventeen, I still hadn't been kissed. My dreams, they looked like crystal-clear lakes whose invitation to swim would never go unanswered, magnificent waterfalls thundering their authority, and craggy peaks daring me to take them on.

Cue the flying monkeys. Wait. No. They were bad...weren't they?