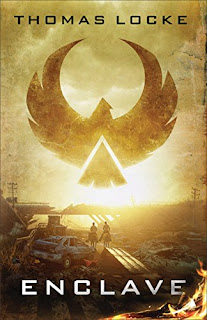 About the Book
It's been 50 years since the Great Crash and what was once America is now a collection of enclaves, governed on the local level and only loosely tied together by the farce of a federal government. Catawba, one of the largest and most affluent enclaves in the southern states, is relatively stable and maintains a successful business of trade with nearby enclaves, including the one at Charlotte Township. But when a new vein of gold is found beneath the feet of those in Catawba, it's only a matter of time before trouble finds them.

Now the future of Catawba may be in the hands of an untried 21-year-old trader named Caleb. And Caleb knows that if his secret were ever to come out, he would never see another dawn.

Why I Need It
I love dystopias so I'm always on the lookout for new ones. This one sounds like an interesting one. I'm super curious about what the Great Crash was and what life is like this "new America".