Review: Lost in Darkness (Of Monsters and Men) by Michelle Griep 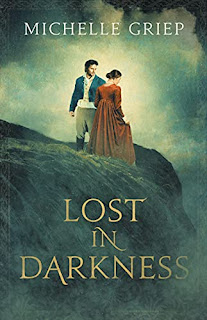 Surgeon Graham Lambert has suspicions about the doctor he’s gone into practice with, but he can’t stop him from operating on Amelia’s brother. Will he be too late to prevent the man’s death? Or to reveal his true feelings for Amelia before she sails to Cairo?
Amazon / Goodreads
MY THOUGHTS
I had high hopes for this novel and I'm happy to say it lived up to my expectations. Exceeded them, even. Frankenstein is one of my favorite classics and this story was a great homage to it. This gothic tale was dark at times, but it was also brimming full of hope and love. It was such a thought-provoking read. I know I'll be thinking about it for a long time to come.

I became so wrapped up in this story that the real world faded away and I felt as though I was right there back in 1815 England with these wonderfully endearing and realistic characters. All the characters, even the despicable villain, were fully fleshed out and three-dimensional. Colin has to be one of my favorite characters in recent memory. He'd faced a lot in his life, been dealt a hard blow, but he was such a good guy, so kind. I hoped, prayed, wished so desperately for a good outcome for him.

I can't say enough good things about this novel. It's one of the best books I've read this year. I highly, highly recommend it and am eager to read more from Michelle Griep.

I won this book in a giveaway and voluntarily reviewed it. All thoughts and comments are my honest opinion.
FIVE STARS
Posted by Ashley Sapp at 12:00 AM