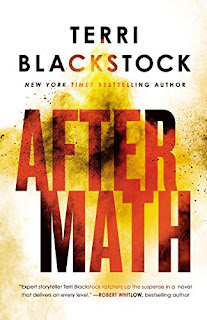 About the Book
A devastating explosion.
Three best friends are at the venue to hear their favorite band. Only one makes it out alive.

A trunk full of evidence.
When police stop Dustin Webb with a warrant to search his trunk, he knows there’s been a mistake. He’s former military and owns a security firm. But he’s horrified when the officers find explosives, and he can’t fathom how they got there.

An attorney who will risk it all for an old friend.
Criminal attorney Jamie Powell was Dustin’s best friend growing up. They haven’t spoken since he left for basic training, but she’s the first person he thinks of when he’s arrested. Jamie knows she’s putting her career on the line by defending an accused terrorist, but she’d never abandon him. Someone is framing Dustin to take the fall for shocking acts of violence . . . but why?
Amazon / Goodreads
MY THOUGHTS
This was an absolute thrill ride from beginning to end. It starts off with a literal bang when a bomb goes off at a presidential candidate's campaign rally, and things hardly let up from there.

It follows four different characters. Dustin, who's wrongly accused of being the bomber; Jamie, his old friend and lawyer; Taylor, a young woman who survived the bombing; and Travis, Dustin's business partner. When there are multiple POVs like that, I usually gravitate more towards one or two of them, but I found all four of them compelling, and each one held my full interest.

I forgot how much I enjoy Blackstock's books. They're always so engaging, fast-paced, and impossible to put down. This one was great, and I'm looking forward to reading whatever she releases next.
FOUR STARS
Posted by Ashley Sapp at 12:00 AM