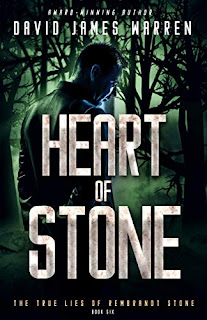 About the Book
Rembrandt Stone has nothing left to lose…or does he?

Detective Rembrandt Stone doesn’t recognize himself in the mirror. Doesn’t recognize the world he’s returned to. Doesn’t even know his own name. But he knows one thing…living in this world is impossible.

Good thing he has an ally—an unexpected friend from the past. And together, they just might be able to unravel the entire mess. But first…Rembrandt will have to return to the past one final time and intercept himself before he makes a lethal mistake.

Time has outwitted him. It’s time for him to outwit time. Can he reconstruct a past he just destroyed or is there nothing left of his world to save?

The explosive ending to the True Lies of Rembrandt Stone!
Amazon / Goodreads
MY THOUGHTS
This was such an awesome conclusion to what's turned out to be my favorite series of the year. It's been an exciting and unpredictable adventure traveling through time with Rem. I was constantly on the edge of my seat and racing through the pages, hoping for a good outcome. There were so many shocking twists and turns. The characters were definitely put through the wringer. Rem, Eve, Burke, Shelby, and all the others will stay with me for a long time to come. I'm sad to say goodbye, but am so glad to have gone on this journey with them. I can't recommend this series highly enough!
FIVE STARS
Posted by Ashley Sapp at 12:00 AM