Review: Joke and Dagger (The Worst Detective Ever #8) by Christy Barritt 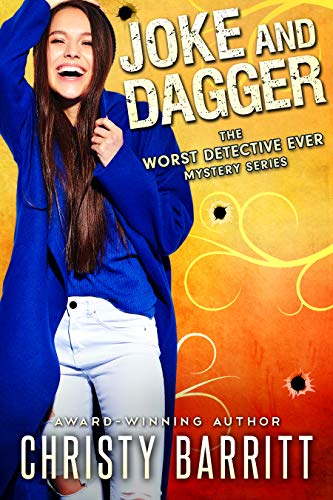 About the Book
Someone has flipped the script, and chaos abounds.

Joey Darling thought she’d take a quick acting gig between filming her hit TV show, Relentless, and prepping for an upcoming movie. The peaceful island of Lantern Beach seemed like a perfect getaway, especially when her fiancé joins her on location.

But from day one on the set, things go awry. Someone alters the script, adding a mysterious death to the movie. At first, the changes seem like a joke. But when real life imitates the script, Joey realizes there’s more to the story.

Joey has no choice but to search for answers—with the help of her fiancé, Detective Jackson Sullivan, of course. Each day, more danger comes Joey’s way, and it’s clear the killer is becoming more unraveled. Joey fears there’s a traitor on the set . . . but can she figure out the killer before the final cut?

I was so excited to dive into Joke and Dagger. The Worst Detective Ever series is my favorite from Christy Barritt. It was so great checking back in with these characters and seeing what they were up to now.

This installment finds Joey on Lantern Beach filming an indie movie between her other projects. With strange last-minute script changes, mishaps on set, random pirates, and a real dead body showing up, it's just another typical day in the life of Joey Darling. With the help of her fiance, Joey goes on the hunt to solve this mystery.

There were some cameos from a few of the characters from Barritt's Lantern Beach series which was so much fun! Loved it! The mystery was good and left me guessing until the reveal. All in all, another great addition to a wonderful series. Can't wait for the next one!