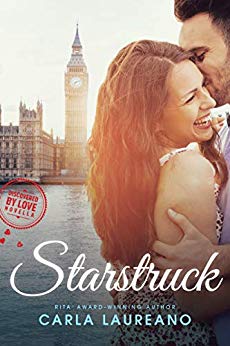 About the Book
Novelist Christine Lind has achieved her lifelong dream—a string of best-selling books and a cable-TV adaptation about to go into production. But on her way to London FanFest for the cast reveal, disaster strikes: their leading man is injured in a motorcycle accident… and his replacement is the one person she hoped she’d never seen again.

Nick Cleary has clawed his way to recognition as a Hollywood actor, but it’s long past time he get the chance to show he’s more than a pretty face and a chiseled set of abs. His big break comes in the form of a juicy lead role in a new steampunk fantasy series. There’s just one catch—casting has to be approved by the author… a woman he once devastated through his own youthful stupidity.

Christine is the last person to be starstruck by the handsome heartthrob, but as the clock ticks down to the cast announcement and Nick races to show that he’s really changed, she begins to wonder if there’s more to her ex than his Hollywood persona. Except now the consequences of being wrong no longer apply only to her career… but also to her carefully guarded heart.

What an absolutely wonderful contemporary romance! I pretty much loved everything about it. It was short, but it worked. I didn't feel shortchanged or that the story was lacking.

Second chance romances are some of my favorites. The obstacles that Christine and Nick have to overcome are big, and might seem insurmountable at times, but they do still have strong feelings for each other. And their chemistry is still off the charts. It's just a matter of whether or not they want to do the hard work to breakthrough all the lingering hurt to see what's still there between them.

I'm a big fan of steampunk, so I really enjoyed the fact that Christine was a novelist in that genre. We got a little sneak peek into one of the books and I'd be thrilled to actually see those be a real thing. They sounded so cool.

This was my first time reading anything by this author and I enjoyed every second of it. I'll definitely be checking out her other books. I'd highly recommend Starstruck to anyone looking for a quick and fun read.