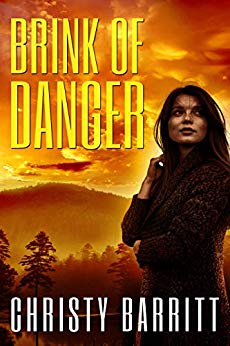 About the Book
Ansley Wilder has always lived life on the wild side, using thrills to numb the pain from her past and escape her mistakes. But a near-death experience two years ago changed everything. When another incident nearly claims her life, she turns her thrill-seeking ways into a fight for survival.

Ryan Philips left Fog Lake to chase adventure far from home. Now he’s returned as the new fire chief in town, but the slower paced life he seeks is nowhere to be found. Not only is a wildfire blazing out of control, but a malicious killer known as “The Woodsman” is enacting crimes that appear accidental. Plus, there seems to be a strange connection with these incidents and his best friend’s little sister, Ansley Wilder.

As a killer watches their every move and the forest fire threatens to destroy their scenic town, both Ryan and Ansley hover on the brink of danger. One wrong move could send them tumbling over the edge . . . permanently.

Brink of Danger is book three in the Fog Lake Mysteries and my favorite one yet.

My anxiety was high pretty much from the first word. There were times when I could hardly catch my breath. But thank goodness there were some lighter moments here and there where I could take a breather. My favorite of those moments were Ansley and Ryan's teasing banter and sarcastic remarks. They were fun to get to know.

The Woodsman was such a creepy villain. We got to see things from their perspective a few times and wow! Chilling, to say the least. I had my suspicions about who the Woodsman was, though I kept talking myself out of it because there were plenty of other viable suspects. So I guess you could say that I had it figured out, but then I didn't have it figured out, lol.

With a gripping opening chapter and ever increasing suspense, Brink of Danger is an unputdownable must read for fans of romantic suspense.