Review: A Distance Too Grand by Regina Scott 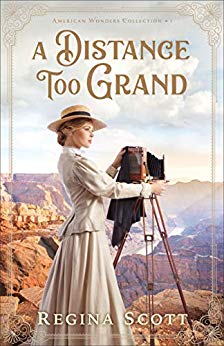 About the Book
Meg Pero has been assisting her photographer father since she was big enough to carry his equipment, so when he dies she is determined to take over his profession--starting with fulfilling the contract he signed to serve on an Army survey of the North Rim of the Grand Canyon in 1871. What she doesn't realize is that the leader of the expedition is none other than the man she once refused to marry.

Captain Ben Coleridge would like nothing more than to leave without the woman who broke his heart, but he refuses to wait even one more day to get started. This survey is a screen for another, more personal mission, one he cannot share with any member of his team.

As dangers arise from all sides, including within the survey party, Meg and Ben must work together to stay alive, fulfill their duties, and, just maybe, rekindle a love that neither had completely left behind.

A Distance Too Grand was an absolutely delightful historical romance. I was pretty sure I was gonna like it, but I've gotta say, I enjoyed it even more than I thought I would. It kept me fully invested all the way through. The characters were wonderful and the setting really came to life. I've never been to the Grand Canyon, but after reading this book I feel like I have.

Meg's got some serious spunk. She's very independent, outspoken, and takes great pride in her job as a photographer, always making it her first priority. She's set to be the photographer on a survey of the Grand Canyon. Well, actually, her father was supposed to do it, but with his recent passing, she plans to take his place. But roadblocks abound when she reaches the base and they refuse to employ a woman for the job. Plus the man in charge of the survey, Ben Coleridge, is the man who's heart she broke years ago. But with a tight deadline, no time to find a replacement, and against his better judgment, Ben has no choice but to take her. She vows to do her very best to prove it's not a mistake. Danger and mystery follow the team, though, making the trek even more perilous.

I can't even express just how much I loved this book. The premise was really interesting and not something I've read about before. I loved learning about all the photography and cartography elements. That was so cool. I had no idea what all went into a survey like that back in the day. I highly recommend this book to fans of historical romance. I can't wait for book two!