Review: A Witch to Remember (A Wishcraft Mystery #9) by Heather Blake 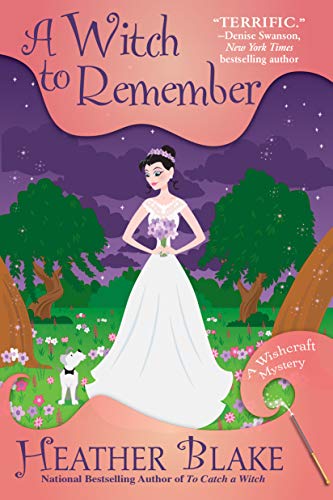 About the Book
Not even a witch can keep her secrets safe in the sizzling ninth installment of national bestselling author Heather Blake’s Wishcraft series.

The Enchanted Village always has a touch of magic about it, but the buzz of excitement over the wedding between wish-granting witch Darcy and Police Chief Nick Sawyer is positively electric. With every spellbinding detail planned to perfection all that’s left is to sit back and let wishes come true. But Darcy’s dream wedding is threatened when the Divinitea Cottage, the tea room hosting her bridal luncheon, goes up in flames, revealing the strangled body of the owner, Leyna Noble.

Making vows to solve the crime without delaying the nuptials, Darcy focuses on her prime suspect, and number one nemesis, wicked witch Dorothy Hansel Dewitt, a notorious firebug. But when a psychic vanishes without a trace, Darcy’s investigation shifts to Leyna’s mysteriously bewitching past. Darcy must sort through mystical claims and old, vengeful grudges to find a killer before she is forced to forever hold her peace.

Finishing this book was bittersweet. It was such a great ending to the series. But it was the end. This has been my favorite cozy series and to know there won't be anymore adventures in the Enchanted Village with these beloved characters has me feeling sad. But what a great way to go out.

I read it slowly, savoring it. I didn't want to rush it. I wanted to linger as long as possible. … That was the plan, at least. But once I hit a certain point, I couldn't stop and had to finish it as quickly as I could. I had to know if everything would turn out alright.

I don't want to say much more because I don't want to spoil anything. I'll just end by saying, this is a must read for anyone who has loved this series. If you haven't started it yet, grab a copy of book one and be prepared to fall in love with the quirky characters and charming village.

(Note: I took a star off because there were multiple instances where God wasn't capitalized. It's one of my biggest pet peeves and totally throws me out of a story. If not for that, this would've been a five star read.)