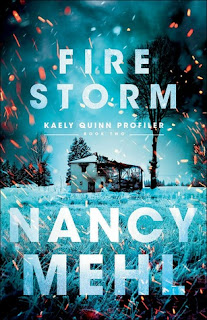 About the Book
When FBI profiler Kaely Quinn's mother is diagnosed with cancer, Kaely takes time off work to go to Dark Water, Nebraska, to help her brother care for their mother. Upon her arrival, she learns of a series of fires in the small town, attributed by the fire chief to misuse of space heaters in the frigid winter. But Kaely is skeptical, and a search for a pattern in the locations of the fires bolsters her suspicions.

After yet another blaze devastates a local family, Kaely is certain a serial arsonist is on the loose. Calling upon her partner from St. Louis, Noah Hunter, and her brother's firefighter neighbor who backs Kaely's suspicions, Kaely and her team begin an investigation that swiftly leads them down a twisted path. When the truth is finally revealed, Kaely finds herself confronting a madman who is determined his last heinous act will be her death.

Kaely Quinn is one of the most unique and interesting characters I've ever read about. In Fire Storm we get to know her and her family better when she returns to Nebraska to care for her sick mother. When there's a string of suspicious fires around town, Kaely questions whether they're accidents like the officials have ruled or if there's something more sinister going on.

I'm not gonna lie, the first book in this series was spectacular, one of the most suspenseful books ever. To say my expectations were high for this one would be an understatement. Was it as good as Mind Games? Not quite. Occasionally, things felt robotic and stilted, and the ending was abrupt, feeling a bit rushed. But in no way does that mean this was a bad read. I did, mostly, enjoy it. It was nice getting to see more of Kaely's family. I felt like I was beginning to understand her better. And the mystery was good, keeping me invested and trying to figure it out alongside Kaely. I finished it in two days which is fairly quick for me.

Despite the few issues I had with this book, I still plan to continue the series. I want to know what happens to these characters. Plus, I just read the synopsis for the third book and oh my! Sounds like it's gonna be a doozy!