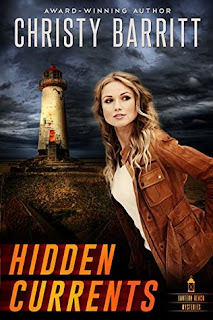 A notorious gang puts a bounty on Detective Cady Matthews’s head after she takes down their leader, leaving her no choice but to hide until she can testify at trial. But her temporary home across the country on a remote North Carolina island isn’t as peaceful as she initially thinks.

Living under the new identity of Cassidy Livingston, she struggles to keep her investigative skills tucked away, especially after a body washes ashore. When local police bungle the murder investigation, she can’t resist stepping in. But Cassidy is supposed to be keeping a low profile. One wrong move could lead to both her discovery and her demise.

Can she bring justice to the island . . . or will the hidden currents surrounding her pull her under for good?

I was super excited when I heard that Christy Barritt had started a new series! She's one of the masters of clean mystery and suspense, so I couldn't wait to start Hidden Currents. And my goodness, what a spectacular mystery it was! The prologue definitely grabbed my attention and I was hooked to the end. I was completely sucked into this story. Time flew by while I was reading it.

Cassidy is a great character - feisty and determined. And Ty! Well, I think it might be a bit of an understatement if I said I like him. He's an awesome guy. Their interactions are so entertaining!

Hidden Currents is one of Barritt's best novels yet! I highly recommend it and can't wait for book two! Seriously, I want it now!