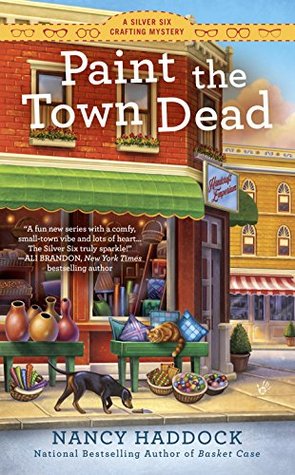 That night playing with the critters took my mind off the puzzle of the missing tools. Dab had gone off to buy toys at some point, and he and Fred proudly announced they'd taught Amber to sit, turn in a circle, and lie down on command. I had to wonder how many dog treats they'd fed her to accomplish all that, yet she dug into her food.

From the national bestselling author of Basket Case comes the second mystery starring the crafty and cantankerous Silver Six.

Leslee Stanton Nix—aka “Nixy”—thought moving to small-town Lilyvale, Arkansas, would be about as thrilling as watching paint dry. But keeping up with her retired Aunt Sherry and her troublemaking housemates—collectively known as the Silver Six—has proven to be as exciting as it is exasperating.

To kick off the grand opening of their craft shop, the Handcraft Emporium, Nixy and the Silver Six invite Doralee Gordon to teach a gourd painting class. Doralee’s spirit gets squashed when her ex-husband crashes the class with his new fiancée, but things really get messy when the bride-to-be later turns up dead. Now it’s up to Nixy and the Silver Six to use their melons to find the killer—before someone else gets painted out of the picture...