This week I'm featuring Tainted (The Soul Chronicles #1) by Morgan L. Busse. I've just started rereading it in preparation of book two in the series. So far, it's as good as I remember. 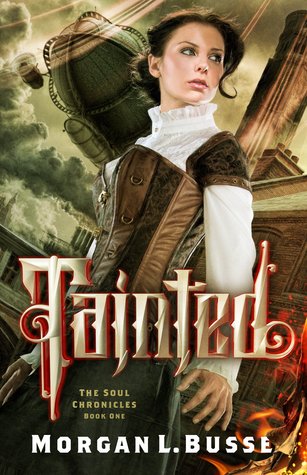 Kat ran trembling fingers across the top of the cream-colored letter and took a deep breath, savoring the moment, calming the quiver in her stomach. The margins of the parchment were smudged from frequent perusal, though the letter itself contained very few words, and she had each one memorized.

He stepped outside the room and quietly shut the door behind him. He leaned against the door and let out a shaky breath. He was spooked, that's all. But he couldn't shake that look on Kat's face, or the images she had spoken about. Her words continued to play inside his mind.

What happens when your soul dies?

Kat Bloodmayne is one of the first women chosen to attend the Tower Academy of Sciences. But she carries a secret: she can twist the natural laws of life. She has no idea where this ability came from, only that every time she loses control and unleashes this power, it kills a part of her soul. If she doesn't find a cure soon, her soul will die and she will become something else entirely.

After a devastating personal loss, Stephen Grey leaves the World City Police Force to become a bounty hunter. He believes in justice and will stop at nothing to ensure criminals are caught and locked up. However, when Kat Bloodmayne shows up in his office seeking his help, his world is turned upside down.

Together they search World City and beyond for a doctor who can cure Kat. But what they discover on the way goes beyond science and into the dark sphere of magic.